I found this in a patent recently and thought it might be interesting for some of you, looks like adding 120 μM HNB could help reduce background noise of EvaGreen-based readouts and let you use higher dye concentrations. We happen to have both reagents as our dyes of choice for fluorescent and colorimetric LAMP so found this useful to know!

The Lens serves almost all the patents and scholarly work in the world as a free, open and secure digital public good, with user privacy a paramount focus.

by adding hydroxynapthol blue (HNB) to sequester the fluorescent intercalating dye ( e.g. EvaGreen® , SYBR® Green , or acridine orange ) prior to oligonucleotide generation , the overall fluorescence fold-change is improved and the time needed for visualization of amplified nucleic acid is shortened…As compared to current LAMP amplification sys tems which measure fluorescence using intercalating dyes such as EvaGreen® , SYBR® Green , or SYTOR dyes alone , the current mixture of fluorescent intercalating dye and the sequestering or quencher agent ( e . g . , HNB ) exhibits a much higher overall fluorescence fold change over the unamplified background compared to current systems that use the inter calating dye alone . For the condition where EvaGreen® is used alone , fluorescence signal above background can be measured after 60 - 80 minutes , and the maximum fluorescent intensity is approximately 3 - 4 fold above background . In contrast , when HNB is included in the reaction mixture , the fluorescence signal can be measured much earlier ; after 30 - 50 minutes , and the maximum fluorescent intensity is over 20 - 50 fold above background . Moreover , adding HNB to LAMP reactions with EvaGreen ? stabilizes the fluores cent signal with respect to changes in temperature . Results using EvaGreen® and HNB in a digital LAMP readout system show that a DNA concentrations of 57 copies / ul or lower can be distinguished above background . 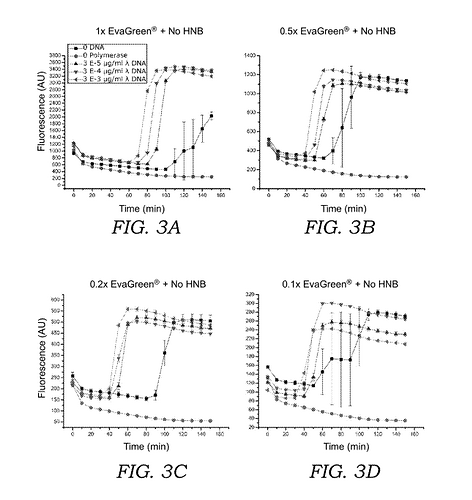 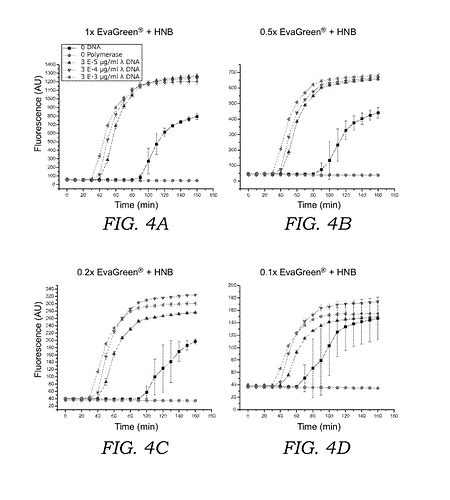 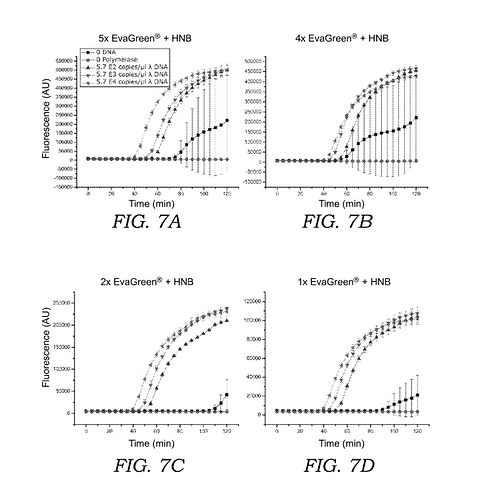 Hi there, we have been experimenting quite extensively with EVA and HNB in LAMP assays for SARS-CoV-2. Indeed HNB improves the fluorescence and even delays the signal from negative samples in LAMP. There is an important consideration though. In the literature, it is rarely discussed that HNB is available in two forms - disodium and trisodium. For the EVAgreen assays only the disodium one is useful, while in regular LAMP the trisodium form is applied (e.g as an indicator). We found that even 0.48 mM of HNB.Na2 is beneficial and you can go even higher.

Aha - thanks Ivan that is incredibly handy to know!
We’ve only used HNB as an indicator so far which means I guess we have the wrong sort!
Thanks for saving us a failed try at this

but also for your information that it is has worked well in your hands with the correct form of the dye.